Jazz is the quintessential American musical form, developed by African Americans in New Orleans and popularized through recording and radio.  Musician of other ethnicities have also contributed to the art, including many Jews: 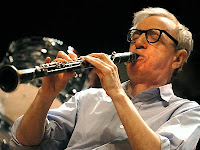 Woody Allen, actor, director, and avid amateur jazz clarinetist.  He plays the New York clubs when he's not busy with his film career.

Herb Alpert, (b. 1935) is a famous trumpet player and crossover artist best known for his hits with the Tijuana Brass (none of whom were Mexican!)

Brecker Brothers (Randy, b. 1945 and Michael, 1949-2007)  Trumpeter Randy and sax man Michael have been two of the most influential musicians of the late twentieth century and the beginning of the twenty-first.  They have performed with each other as The Brecker Brothers and have collaborated with the leading musicians of our time.

Harry Connick, Jr. (b. 1967), pianist and crooner, is the son of an Irish-American father and Jewish-American mother.  He won a Grammy award for his work on the soundtrack to When Harry Met Sally, establishing him as America's top jazz vocalist.

Sammy Davis, Jr., one of the famed "Rat Pack" Las Vegas crooners, converted to Judaism after a near-fatal car wreck.

Leonard Feather  (1914 - 1994) wrote reference books and was also a performer and songwriter.

Stan Getz, (1927 - 1991), played tenor sax with a suave, cool sound.  His is best known for his Latin-themed recordings including his collaboration with João Gilberto on the song,"The Girl from Ipanema."

Garry Giddins (b. 1948) is a writer who has covered jazz for decades in The Village Voice.  His books cover all of jazz history and include biographies of great jazz artists.

Norman Granz (1918-2001) was an influential producer, who helped the cause of civil rights through jazz.

Nat Hentoff (b. 1925) is a prolific writer about jazz and civil rights.  Well into his 80s, he continues to contribute a column to Jazztimes.  He has written several books and penned the inserts for many recordings.

Harry James (1916-1983) was the featured trumpet soloist with the Benny Goodman Orchestra and then started his own band with a young Frank Sinatra as his lead singer.  He is still revered today for his impeccable tone and virtuosic technique.

Kenny G (b. 1956) is the top-selling jazz instrumentalist of our time.  His soprano sax solos are the epitome of the "smooth jazz" style.  He is also known for his unique off-center embrochure.

Lee Konitz  (b. 1927) has played alto sax as a soloist and with almost every famous jazz musician of the past 60 years.

Mel Lewis (1929 - 1990) was drummer and co-leader of the Thad Jones/Mel Lewis Orchestra, then performed weekly at the Village Vanguard after Jones' departure.
﻿﻿

Herbie Mann (1930 -2003) fused jazz with world music, especially Latin rhythms.  He was a popular crossover artist and one of the few artists of any style to perform regularly on the flute.

Buddy Rich (1917-1987) was one of the best drummers of history, starting out in the big band era and continuing his career as a leader.  He frequently appeared on television during the 1960s and 1970s.

Mel Tormé (1925 - 1999) was a singer nicknamed "The Velvet Fog" for his smooth vocal tone.  His best-known song is "The Christmas Song" (Chestnuts Roasting on an Open Fire).

Paul Whiteman (1890 - 1967) was one of the first bandleaders, leading record sales in the 1920s when bands were still called "dance bands."  His band backed Paul Robeson's famous recording of Ole Man River.